“I write because I don’t know what I think until I read what I say.” — Flannery O’Connor 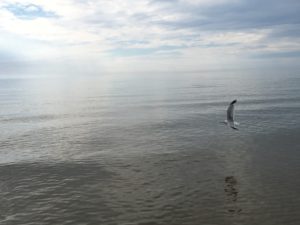 This is one of my favorite photos from my family’s trip to Michigan a couple of years ago.

We were at Lake Michigan and this gull flew into my camera frame just as I was taking a photo to remind myself that sometimes we can’t see the end of a journey. The picture was to represent the sky meeting the horizon in endlessness. Then this bird came in and changed everything.

The photo would have been just fine without the bird in it. It would have said what I wanted to say to myself. But that bird— that bird changed the photo and made it a truly nice photo that said way more about the day than a mere horizon photo would have done.

That bird gave the photo depth and meaning which wasn’t now just for me, but for a larger audience. In a word, that bird changed EVERYTHING.

Sometimes the smallest of things can make the biggest changes in our thoughts and lives. Sometimes the unexpected can make something so much better and more meaningful than what we would have thought alone…

Why do I write? Because often something unexpected, but meaningful comes from it. Like the quote I used for today’s blog post, “I write because I don’t know what I think until I read what I say.” When I get “lost” in true writing, I honestly have no idea what will come out of it. Just like this photo, I had no idea the joy and pleasure that this simple “mistake” would make in my enjoyment of this photo.

What are some things that give you joy unexpectedly?

Feel free to share them in the comments below!

Where do I start?